Blockchain governance mechanism refers to a set of decision rules and action standards for stakeholders in the blockchain ecosystem to agree on decisions. The goal is to allow the decentralized network to iteratively develop over time. In the blockchain, some important technologies, such as consensus mechanism, scalability, security, etc., can be better solved by providing reasonable incentives through the governance mechanism. A complete blockchain governance mechanism should be the combined product of blockchain technology, economics, and politics, including rights distribution, economic incentives, and technological realization. The blockchain's ecological structure consists of developers, miners, and users. Each role in governance needs to play its own value, assume corresponding responsibilities, and obtain corresponding benefits. The significance of governance is to reduce the occurrence of community fragmentation and chaos, help the community to improve the efficiency of project update and iteration, and increase the participation of community members.

At present, governance is divided into off-chain governance and on-chain governance from the big model. Off-chain governance is controlled by core developers. Nodes send their decision signals by installing their preferred software and give full responsibility to those who run complete nodes. It has higher flexibility, but requires higher social coordination costs and lacks reasonable Incentive mechanism restricts the entry of new developers. On-chain management has a clear set of governance processes, which are forcibly upgraded through the on-chain proposal voting mechanism and hand over decision-making power to stakeholders.

Direct democracy involves the holders of money directly participating in the formulation of rules, using one coin per vote, and a higher degree of decentralization, such as Decred and Tezos. In direct democracy, there are often problems such as turnout, professionalism, and token concentration. Indirect democracy is the representative system. Representatives are elected through different methods and rely on the representatives to exercise their rights, such as the EOS super node, the board in Polkadot, and the "follow voting" mechanism in DFINITY. Indirect democracy needs to take into account the design of governance structures, the allocation of power, and incentives.

In our opinion, decision-making power should belong to "stakeholders", that is, the right belongs to the people. However, the referendum needs to take into account issues such as implementation costs, turnout rates, professionalism, and governance efficiency. Therefore, the referendum should not be the governance norm, but also the governance method in the case of major differences. In our PPoS design, the generation of validators is an election in itself, and the interests of validators are closely related to the rise and fall of the public chain ecology. It should assume more governance responsibilities and have more governance rights. Therefore, in Alaya governance, we have adopted a combination of direct and indirect democracy. Its core principles are: in the normal state, voting by the validator, that is, indirect democracy; under major differences, voting by the community, which is direct democracy. 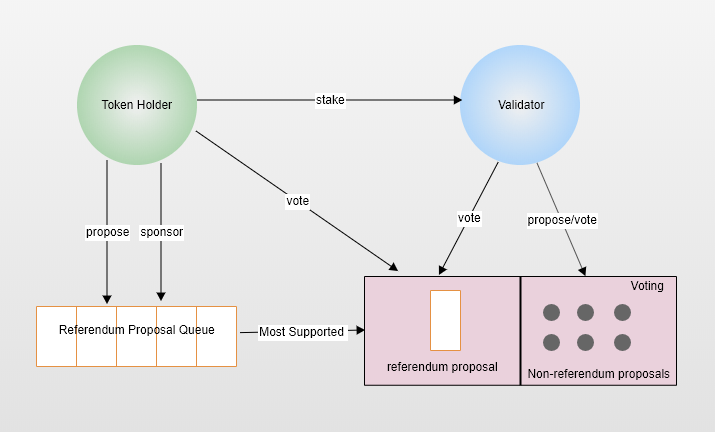 When both: Validator support rate> M% and validator participation rate> N%, the proposal is voted through, otherwise the proposal fails to vote.

Note: In the software upgrade proposal, the default validator participation rate is 100%.

The upgrade mechanism is a guarantee that the network can continue to iterate and improve. For different situations that may occur during the operation of the blockchain system, we should provide targeted upgrade methods, mainly in the following four cases:

Below we will focus on the on-chain voting upgrade mechanism.

After the software upgrade proposal is successfully launched, it enters the voting phase. Only validators can participate in the voting, that is, the voting transaction can only be initiated by the node's pledged account. Before voting, the local node must be upgraded to count votes by one person and one vote.

We did not set voting options for "support", "oppose", and "abstain" in the voting transaction for the software upgrade proposal, but expressed our position through node behavior, as follows:

The following parameters are required to upgrade the proposal voting transaction:

Although the node has been upgraded during the voting period, the logic currently running is still the logic of the old version. Wait until the implementation is complete before switching to the new version of the logic.

The voting result of the upgrade proposal is highly counted at the voting deadline block. If the voting situation in the voting cycle is as shown above:

If $SR \geq 66.7%$, the proposal is voted through and the implementation phase is entered.

Due to the randomness of VRF selection of candidate nodes and in order not to affect consensus, we need to ensure that the verification nodes in a consensus round are all upgraded nodes when implementing the upgrade.

Therefore, when the proposal voting deadline is high, the proposal's approval rate reaches 66.7%, then the upgrade will be implemented in the first block of the next consensus round, and no non-upgraded nodes will no longer be selected to participate in the consensus. In the current settlement cycle, the eliminated non-upgraded nodes will just not be selected by VRF to participate in consensus, but still enjoy the pledged benefits of the current settlement cycle.

As there may be data incompatibility between different versions, in order to avoid consensus failure due to version issues, the node version on the chain should be controlled, so we introduced a version declaration. A node initiates a version statement to indicate that its node version is consistent with the target version number in the current chain version or software upgrade proposal vote, so that it can have the opportunity to participate in consensus normally before and after the upgrade.

When the node version and the version on the chain are inconsistent (the first two digits of the version number are different), the node will not be selected to participate in the consensus, even if the pledge is high, at this time, the node can declare that its node is consistent with the chain version by initiating a version declaration transaction. In order to participate in consensus in the subsequent settlement cycle. When there is a voting software upgrade proposal on the chain, a version statement consistent with the upgrade version can be issued. The version statement does not represent a vote. After the upgrade proposal is voted through, the node that has the same version number as the upgrade destination is declared without voting. Can participate in consensus normally.

The following parameters are required to cancel a proposed transaction:

When designing a governance mechanism, a good system is needed to encourage more interested and capable professionals to participate in governance, and at the same time punish malicious acts such as occupying network resources.

If the dishonest node achieves the upgrade by disguising the version, when the chain upgrade is successful, the validator is selected to participate in the consensus, and the block generation rate will be low because the block cannot be consensus, which will result in system punishment. You can directly disqualify the node.